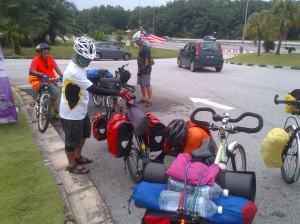 One thing good about the internet, it is borderless and distance does not mean anything anymore. You can skype with a friend at the other side of the world, thousands of miles away real-time. Of course you still have the different time zones to deal with. Malaysia sits on GMT + 8 hours so by the time I wake up in the morning a friend in London will about to go to bed. The different time zones are great when you have a blog, once you upload a post, you technically will get a view around the clock from people all around the world.

For this blog, most of the views comes from my friends in Malaysia but given that the love for cycling is universal, I do get occasional visits from United States, Turkey, France, Belgium, Canada, South Korea, New Zealand and Australia. I do appreciate and welcome their visit to my blog.

While bike touring, communication can either make the adventure enriching or frustrating for the cyclists. In Malaysia, any foreign tourist or bike tourist will not encounter a lot of communication problem as English is widely spoken side by side with Malay, our national language. In fact when a Malaysian speaks to another Malaysian, you can probably understand 50% of what they are talking about since the current lingo borrows from English a lot (if you ignore all the “lah” and “maa” probably your understanding will increase to 60%). However, if you travel to really really rural areas, into some far flung villages, maybe you would face some “lost in translation” moments.

Just in case you somehow end up in places where no one understands English, I’ve compiled for you some simple Malay words and phrases for you to get by during those awkward moments. Malay is a very simple language, let me show you.

When you entered a village in the middle of nowhere and you see a person you want to greet, you just say “Hello” (see I told you it is easy.. you don’t need the fancy Ni Hao, Sawadee kap, Namaste, etc).

The three things during bike touring that could probably go wrong are your tyre, your tube and you need a pump (if you lose yours along the way). So while pointing to your bicycle (the Malay word is “basikal” pronounced “bicycle” ) you can say the Malay equivalent of the three items: one is tayar (pronounced “tyre”), the second is tiub (pronounced “tube”) and third is pam (pronounced “pump”). How much easier can it get ???

If you feel a bit more adventurous and want to mingle with the locals you can try these two important phrases that can quickly build a friendship with whomever you meet along the road (don’t worry I won’t trick you into saying something vulgar unknowingly hehehe).

The first one is probably the most important and most powerful word in the entire Malay vocabulary that you will ever learn, saying “Thank You” in Malay.

Thank you = Terima kasih (pronounced as “Tree.ma.car.say”). In a direct translation, “terima” means “receive/accept” and “kasih” is “love or compassion”. So technically when someone does nice things to you, you thank them by saying “please accept my love/compassion”. (Isn’t that a beautiful concept?)

In return the recipient will say “Sama Sama” (pronounced “summer summer”) which literally mean “same to you too”. Malaysians are very hospitable, friendly and polite people (unless they are driving). Saying “terima kasih” with a smile goes a long way and immediately creates a bond between you and the recipient. And if you keep saying “terima kasih” several times in a span of a 10-minute conversation world peace can created. 🙂

The second phrase to say, the one that will seal the deal in your newly formed friendship, at the moment when you are about to leave a place is to say “Jumpa lagi” (pronounced “joompa laggy”).

It is the equivalent of “I’ll see you again”. “Jumpa lagi” is a more forward-looking phrase with a tinge of hope to see each other again instead of saying “Selamat Tinggal” (which is “Goodbye”) which indicates finality, as in “that’s it, I’m outta here for good” kind of flavor.

There you go, two simple but effective phrases. I hope you learn something new from your visit today.

3 thoughts on “Bike Touring in Malaysia: Simple Malay phrases for survival on the road”