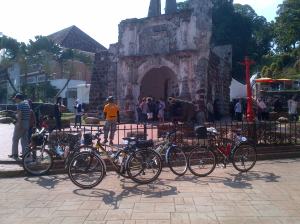 Sometimes the best experiences in life come from unplanned adventures, an impromptu decision to take a right turn instead of going straight ahead, or a spur of the moment decision to join a bike touring trip made up of people you hardly know.

Most of my cycling adventures thus far had been solo rides and always using routes that I can complete within a day. No matter how hard or far I ride during the day, be it a century ride (check my earlier post on My Solo Century Ride) or bike excursions to the beach or hills, I always return home to the comfort of my bed and familiar surroundings when night falls.

One day, my brother, Nazry, mentioned that he is going on a 4-day bike touring trip from Putrajaya to Malacca and back with a few of his friends. I’m not sure if he was inviting me to come along or was just informing me in passing but just at that spur of the moment, I thought to myself “hmmm that’s a great idea and I also happened to be free during the time”. So let’s just say I invited myself into my brother’s touring expedition. I was told it is a self-supported tour, so I have to bring my own tent, sleeping bag, cooking utensil, bicycle spare parts, etc.

As far as my preparation for the trip, I already have a touring bike, a RM1300 (cheap but good) XDS Four 91, a 700c aluminum frame touring bike with rear and front racks, suspension fork, mudguards and wide 38mm Kenda tyres. I also have my waterproof Ortlieb panniers and a small handlebar bag that I normally use for my bike excursions. What I had to buy for this trip were a tent, a sleeping bag and cooking utensil (all I bought at the Ace Hardware store in Bukit Jelutong).

Being my first multiple-days bike touring/camping expedition I was not really sure what to pack, how many clothes to bring, etc. But I think the general advice for bicycle touring is that if you can do with less, the better it is. You will thank yourself for leaving the “lesung batu” (granite pestle and mortar) for making “sambal belacan” at home when you are struggling slowly on your climb up a steep hill with your bike fully-loaded. (For first timers, I’ve set up a page on my site under “Resource” where you can find a general list of things to bring for your own bike touring trip a guide – courtesy of bro Amran, one of the touring sifus now semi-retired, but I suspect it will not be long before he makes a comeback).

Honestly, for that trip I was more concerned with the unknown people I will be touring with. Of course I know my brother well, but how are the others?

I’ve heard of horror stories of people who cannot get along with each other during road trips due to personality clashes which in the end totally took the joy out of the trips. If you have touring partners who are in sync with you (share similar likes and dislikes) and comfortable with who you are (for example, some people could be faster and stronger riders than you, so if you are slower, they may not enjoy waiting for you all the time) then you have the makings of a great adventure ahead.

As I packed my panniers and got my bike ready for my touring adventure, I said a silent prayer and hoped that all will turned out well.

The next post will be on Day 1: Putrajaya to Pengkalan Balak, Malacca